Gone are the days where clubs would buy players for a miserly fee. Top talent would either move around for the equivalent of a month’s rent in London or not move at all. This would happen because some players were keen to create a legacy at a single club rather than drumming up a huge transfer fee. Nowadays, players have huge power in the fortunes of their club in their actions both on and off the field.

Huge fees have been paid for world-class talent all over the planet, with the world of football not excluded from monetary inflation. This has seen the transfer record broken over and over again. The world record fee of £80 million for Cristiano Ronaldo back in 2009 seemed like a huge price tag at the time, but this has since been broken multiple times. The record now stands at £198 million, when Paris-Saint Germain paid to bring Neymar to Ligue 1 from Barcelona back in 2017.

In conjunction with the ever-rising price tags of footballers have come owners that are wealthy on a scale not matched in many sports. The likes of Manchester City, Paris-Saint Germain, Chelsea and now Newcastle United have seen huge cash injections from mega-rich owners, with these aiding pushes for silverware or, in the case of the Magpies, their survival bid. With this influx in cash has come the need to regulate these clubs, with Financial Fair Play rules coming into force. This was seen as a way of ensuring teams cannot simply buy their way to the top, but has it actually worked?

What Is Financial Fair Play? 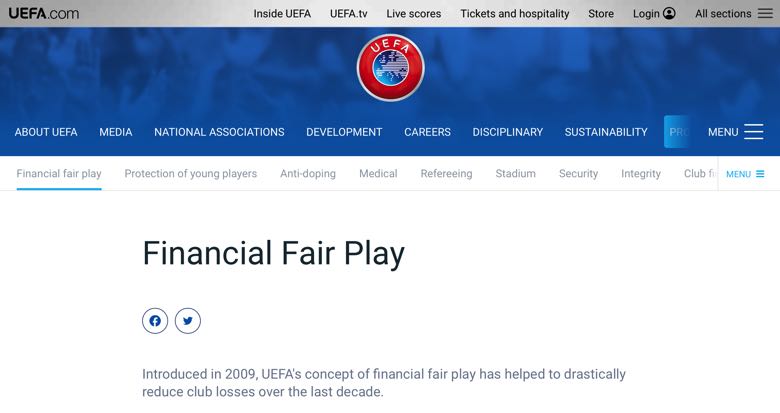 The UEFA Financial Fair Play (FFP) rules are a set of regulations that were brought in to stop a side from spending more money than they make. These regulations were brought into force in 2009 by the Financial Control Panel of European football’s governing body. From the point of view of a club, it is an attempt to ensure that they do not put themselves in financial hardship by spending more than they make.

For sides on the outside looking in when it comes to trophy winning, it is an attempt by the governing body of European football to even the playing field slightly. However, many have claimed that FFP has only succeeded in ensuring the status quo of football is kept the same, with the rich getting richer and the poorer sides ultimately missing out on potential new investors. Of course, there have been some notable teams that have breached FFP, with the mega-rich in football not always playing by the same rules as the rest of the world.

How Does Financial Fair Play Work?

FFP brings sanctions against sides that breach its terms and spend excessively. A set of financial frameworks will see teams given a budget to work with if they are to break these rules. The harshest punishment that can be served to a club is expulsion from European qualification.

Alongside this, clubs are also subject to fines, the withholding of prize money and bans on player transfers. With the cornerstone of FFP requiring teams to ensure they break even at the very least, it is a requirement that a club ensures that their losses do not exceed more than €5 million over three years.

This will quite often see teams looking to tighten their belts with regard to player wages and potential transfers. This has seen many big clubs forced to cut down the amount they pay their players and sell someone in order to fund bringing somebody else in.

FFP is something that has split opinion since its inception. At the time, many cited that it would be able to cut down the significant debt that some clubs had run-up. This would see more intelligent and frugal spending from teams that were looking to take the next step in their respective competitions. FFP seems to have done its job then, with the net losses across Europe standing at €1.6 billion in 2008, while the debt of the European sides in 2019 stood at €125 million, a massive fall.

However, there have been some problems with FFP. In fact, an area that FFP has failed to curb is the huge inflation of player wages and transfer fees. Salary caps and a tax on transfers have been touted, but it seems unlikely that UEFA will look to replace FFP at this time with alternative measures to combat this.

This failure to really curb the increase in wages and transfer fees has only seen the wage bills of clubs along with how much they have to spend on a player increase. Ultimately, this has driven the outgoings of clubs to increase. While the introduction of FFP was met largely by positive reactions from the majority of club owners, it has been cited that it limits the market and has merely maintained the status quo in the beautiful game.

Which Major Clubs Have Been Victims of FFP?

There have been a number of clubs that have been subject to FFP-related punishments. However, there are three sides that stand out as far as being the biggest clubs to come into difficulties with the financial side of the game. The first were Paris-Saint Germain who, in 2014, were fined €60 million, although €40 million of that was suspended. Their squad for UEFA competition was reduced to 21 players and they were subject to a two-year squad salary restriction along with transfer spending restrictions.

Manchester City were also the victim of breaching FFP in 2014 too, with the Premier League club given the same punishment as PSG. Finally, the punishment for AC Milan was one that seemed far harsher as they were banned from European competitions for a year back in 2019. In comparison to City and PSG’s punishments, this one seemed like a ruling that would hurt the fans far more, although the hierarchy at AC Milan would likely have been pleased to escape being given a hefty fine.