Aerial drones used to be the playthings of children on Christmas day. Most would charge it up over the course of the afternoon before enjoying the novelty of controlling a small drone that flew through the sky. This would all come crashing down after the drone met a low-hanging tree, which usually saw the piece of kit put back in its box and shoved under the bed, and that was that.

Times and technology have changed exponentially since these cheap drones were in circulation, and this has seen their uses change too. Now, drones are responsible for some truly stunning photography, while many films actually choose to utilise drones for filming too. Clearly, times are a little different than from when little Timmy next door would invite you over to see if a £19.99 drone would cut through a leaf.

With the increase in what drones are capable of has come people wanting to use drones for a whole host of other reasons. One such use is to fly them over football stadiums during matches. These drones can sometimes be seen flying over packed sporting venues, but what does the law say about their usage?

What Laws Must Drone Flyers Adhere To?

Set out by the UK Civil Aviation Authority (CAA), there are a number of rules that those wishing to fly drones must adhere to. These are:

In particular, rules three and four are what stops drone users from flying over a football stadium and filming a game. Drones are prohibited from flying over crowds, while they must stay away from recreational areas.

It is very important from the perspective of a footballer that a drone does not fly overhead as this could compromise their safety. This is also a similar problem for fans as if a drone threatens to fall on a large crowd, it would likely cause carnage with those people trying to ensure they are not hit by the falling drone.

Damage to the Stadium

Ensuring a drone does not go near a stadium will minimise the chance of this piece of technology damaging the stadium and its facilities unnecessarily too, as many of these drones carry considerable weight behind them.

Finally, ensuring no drone can fly over a football match means that nobody can watch a game for free, with many drones outfitted with the ability to film what they fly over. Without these rules it would be possible for a fleet of drones to fly above the stadium of a sold-out match.

Has a Drone Disrupted a Football Match Before? 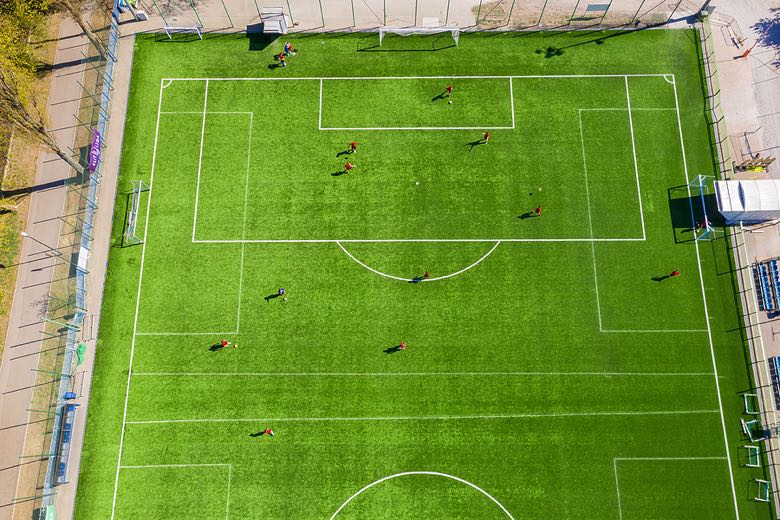 There does not seem to be any documented instance where a drone flying over a game has resulted in injury to a player or fan. One infamous instance of a drone at a football game was recorded back in 2016. Serbia and Albania were playing and a drone was lowered into the stadium with an Albanian flag attached to the drone.

Tensions were already very high between the two rival nations, and this proved to be the tipping point as some Serbian fans rushed onto the pitch. The players were quickly hauled off the field with the game eventually abandoned. A person was arrested a year later for their part in the chaos, showing that drone related incidents at football games are not taken lightly.

Meanwhile, In the UK a man was fined £1,800 for flying a drone over a number of sporting events, including a North London derby. Due to the fact he had previously been warned and had his drones taken from him, he was eventually given the fine as a greater deterrent due to the fact simply taking his drones away was not enough to stop him from flouting the law.

Can Drones Be Used at Football Matches?

Yes, there have been instances where drones have been legally used at a football game. These times have come when the match ball is delivered to the stadium via drone. These instances saw the drone utilised alongside the relevant authorities and staff at the stadium, rather than by a fan simply trying to fly their drone too close to a stadium.

What Happens If a Drone Flies Over a Football Match?

This would therefore see a game suspended until the drone is captured by the relevant authorities. If the drone itself is unable to be captured, then the game would likely be abandoned, with the safety of the players and everyone inside the stadium of paramount importance.